NASA recently released over a half a century of sounds on SoundCloud, ranging from eerie noises from our solar system to historic moments in space exploration. The U.S. space agency recently created a SoundCloud page to reveal some of the most unusual sounds ever recorded, according to Mother Nature Network.

Although sounds in space are stifled by a vacuum, scientists have discovered ways of capturing noise using special instruments on the Voyager space probe that converts electromagnetic vibrations into sound, Gigwise reports.

The recordings include sounds of Saturn’s rings, Neptune, Jupiter, and Uranus, as well as what Earth would sound like millions of miles away. The files also contain sounds of shuttle launching and famous quotes from NASA astronauts.

Some of the sounds are quirky, chilling, and otherworldly. Here are seven of NASA’s most interesting uploads.

In January 2006, New Horizons was launched for its long journey to explore Pluto and its five known moons. This will be NASA’s first opportunity to explore the distant planet of which little is known since its 1930 discovery.

Pluto is the most famous resident of the Kuiper Belt, an area of space beyond Neptune that is filled with innumerable objects that are believed to be remnants of the formation of the solar system. A Dutch astronomer, Jan Oort, theorized that comets might originate from this distant region. Gerard Kuiper first envisioned the existence of icy objects beyond Neptune in 1951.

The Kuiper Belt is about 3 billion miles from Earth and is similar to the asteroids that orbit the sun between Mars and Jupiter.   The asteroid belt is filled with rocky objects whereas the Kuiper Belt’s objects are icy. Several dwarf planets, of which Pluto is one, exist in… 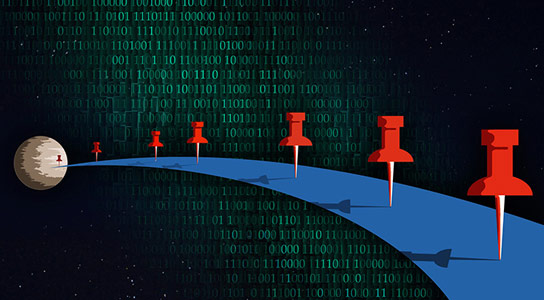 Astronomers have discovered a new planet that has a highly inconsistent orbit time around its Sun.

The low-mass, low-density planet, known only as PH3c, which is 2,300 light years away from the Earth, has an atmosphere loaded with hydrogen and helium.

The planet nearly escaped detection as PH3c does not have a consistent orbit time around its Sun due to the gravitational influence of other planets on its system.

“On the Earth, these effects are very small, only on the scale of one second or so,” said Joseph Schmitt, a graduate student at Yale University.

This inconsistency kept the planet out of reach for automated computer algorithms that search stellar light curves and identify regular dips caused by objects passing in front of stars, he said.

The researchers discovered the new planet with…

Where sin abounds, people flail about, gouging each other’s eyes out and maiming one another in the ensuing darkness.

Good intuition tells you what you need to do long before your head has figured it out.

Do not allow other people to define who you are. That is something you need to figure out on your own.

Mathematics-A Language the Universe Speaks Through

Scientists are renowned for relying on Mathematics in their work of trying to discover and explain the laws governing the operations of our universe and nature. They conduct experiments and draw quantifiable inferences about the regularity of nature. Disciplines such as neurobiology, astronomy, economics, Ecology, Engineering and physics etc. all largely utilize Mathematics. Galileo is reported to have said that “Nature’s great book is written in mathematical language.”

The universe is said to speak to us through the language of Mathematics. For instance, the paths of the planets of our solar system around the sun occur in a mathematical pattern. The speed of ships on the ocean is measured in mathematical terms. The distance from one planet to another can only be expressed mathematically. The same applies to the measurement of the speed of light. As such, physicists are starting to believe that Mathematics is beginning to “lead and direct research in physics.”

What is fascinating about Mathematics is that it is free from being influenced by people’s personal biases and prejudices. For example, a simple equation such as 5+3= 8 is a fact that cannot be modified or altered by anyone’s bias. Although the findings of our experiments may be explained in the English language, this is merely a translation of the mathematical findings of our experiments.

Sir James Jeans, a British astronomer and physicist, awed by mathematical explanations of nature, remarked that “God is a Mathematician.”

The Christian perspective claims that “Man has developed different ways to express on paper [the] consistency God has placed around us” in nature. From time immemorial human beings have used an array of symbols to represent quantities and other measurements. The Roman used what we know as Roman numeral such as VII, X, C, etc. and we have adopted the Arabic symbols to represent our quantities such as 3, 7, 11 etc. Amazingly, our mathematical equations remain consistent wherever they are calculated. For example, 1+3 will always be equals 4 whether calculated on the moon, on earth or deep under the sea in a submarine. No place in the universe can alter the answer to this equation. Because God consistently and faithfully holds nature and its laws together, their mathematical representations remain constant anywhere in the universe.

The Bible attests to the God’s covenant with the laws of nature: “This is what the LORD says: ‘If I have not made my covenant with day and night and established the laws of heaven and earth, then I will…” (Jeremiah 33: 25, 26, NIV). God arranged nature the way it is. Look, for instance, at the way flowers are arranged. They come season after season arranged in the same order, never deviating from it. The seeds of some flowers such as the sunflower follow a mathematical pattern which allows the flower to be able to hold together a certain number of seeds as its maximum load. Is this all happenstance?? When Jesus said “God clothes the grass of the field…” He alluded to this same principle (Matthew 6: 30).

After saying these things, Jesus crossed the Kidron Valley with his disciples and entered a grove of olive trees. Judas, the betrayer, knew this place, because Jesus had often gone there with his disciples. (John 18:1-2)

Relate: Do you have a spot? Actually, currently I have three. Problem is, none of them are perfect and I don’t use them enough. One has a tendency to get a bit loud at times depending on what is going on nearby. It is a private spot, but I am not always in the right mindset to be able to shut out those distractions. Another spot, technically, I am not supposed to be in after dark and the times I most want to go there are after dark. A few times I’ve had a nice officer come over and interrupt my prayer to ask me what’s going on, what…

I’ve concluded lately that I must be suffering from a physical or mental ailment. I have been having peculiar, unexplained symptoms. They include, hallucinations, an inability to properly string together sentences coherently, and I have been hearing voices!

I noticed the first symptom one day when I asked my children if their rooms were clean. To which they unanimously, with an eye roll each, and a quick snicker to one another, replied,

Something about the way they snickered led me to believe they may not be practising honesty. I decided to go investigate for myself and low and behold my eyes conjured up an unholy mess that according to my children, “wasn’t even there.” I sighed and in an attempt to gain sympathy from my husband I exclaimed,

“Would you look at this mess!”

My husband at the time, was playing clash of titans on…